Nearly five generations of men have passed since Morgoth was banished to the Void by the Lords of the West led by Eonwe. Earendil slew Ancalagon the Black, Thorondor overthrew Angband and the War of Wrath came to an end. With this, the Simarils were lost and the Oath of Feanor is complete as the Doom of Darkness took he and his kin. But all was not the same in Arda; the desolation wrought by the strife caused Beleriand to sink beneath the sea. Alas, the Valar had pity on the Men of the West and raised Numenor out of the sea.

Elros, brother of Elron Half-Elven and son of Earendil became king of the Edain, seated at Numenor. Gil-Galad is High King of the Noldor and peace has found Middle Earth. Twenty years ago, Elros, Tar-Minyatur passed to the Timeless Halls and his eldest, Varamir Nolimon was crowned. Seeking a life of lore rather than that of ruling, the eldest of Elros abdicated to his firstborn heir, Tar-Amandil.

Searching the libraries and studying with the great Elves, Varamir seeks knowledge, history and treasure. Learning of the Simarils and the craft of Feanor and the Noldor of Amon, the Eldest of Elros looks for fearless adventures to hunt down lore, delve into barrows, find craft from the bladesmiths of Gondolin, and to Hunt for the Lost Simarils.

Unwritten Tales; Hunt for the Lost Silmarils is a Table-Top Role-Playing Game designed by ManaRampMatt for DiceJam2021. Unwritten Tales: Hunt for the Lost Simarils heavily uses lore from J.R.R. Tolkien’s Legendarium but is in no way official or connected to the Tolkien Estate. This is a fan made game and is to be seen as a humble nod to the immensely beautiful world of Middle Earth. All names, locations, and events referenced are inspired by the Tolkien Legendarium. Enjoy.

Unwritten Tales: Hunt for the Lost Simarils uses game mechanics seen in Into the Odd by Chris McDowell, Mausritter by Isaac Williams, Maze Rats by Ben Milton, and Wanderer by Nate Treme

Unwritten Tales is NOT FOR SALE and is meant to be seen as a fan’s appreciation of J.R.R. Tolkien’s works. It is in no way connected to the Tolkien Estate. All art used in Unwritten Tales is pulled from Google Images and the author ManaRampMatt is in no way looking to gain monetary gains, if anything, He wants to showcase all the amazing Tolkien Fan Art (Artists feel free to contact me so I can credit you). Please enjoy and love the amazing world of J.R.R. Tolkien

If you've played some of the official Tolkien RPGs you've seen they're mostly based on LOTR: Almost no magic, lots of travelling, very realistic tone.  This game is more based on The Hobbit, where adventuring is something that just happens and you can accidently enter a secret goblin cave or fall asleep after crossing a magical river. It blends Tolkien lore with classic OSR gameplay and simple rules. If your group plays MERP, TOR or AIME and wants to try something different while still in Middle-Earth, this is it.

WOW, thanks for the kind words!!!

Love it! There seems to be a problem with some jumbled words on page 12 in the "example of battle" section.

I uploaded the wrong file, oops! It is fixed now! Thank you 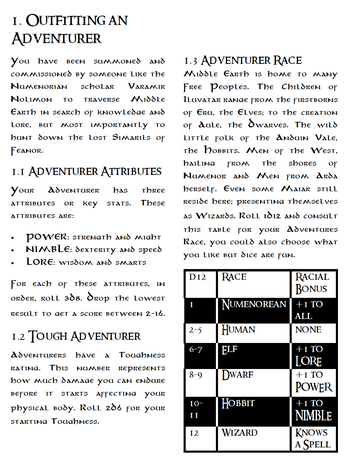 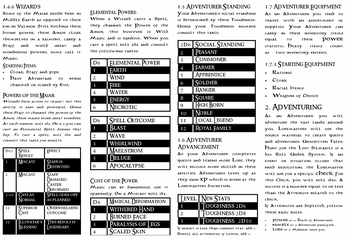